Benefits of Dru Yoga and Meditation

Benefits of Dru Yoga and Meditation

Dru Yoga and Meditation offers a variety of benefits to your body, mind and emotions. It can help reduce physical tension in the body, increase positive thinking and transform your life in a way that ripples out to benefit all of those around you.

Here are just a few more things that Dru can do for you:

If this sounds good, read on!

On the verge of making a major transition in my and my husband's lives, we found the techniques I've learnt on the Dru Yoga teacher training course to be fantastically helpful for managing stress and remaining centred.

In an article published in January 2013 in the British Journal of Sports Medicine, Dru Yoga is quoted as being part of a successful 7 point plan, used by physiotherapists on Liverpool Football (soccer) Club’s players to reduce hamstring injuries.

Recurrent hamstring injuries are a major problem in sports such as soccer. The research followed a professional soccer player who had sustained five hamstring injuries. Liverpool’s doctors and physiotherapists successfully used a seven point programe which included Dru Yoga. The player started regular sessions of yoga-based stretching and relaxation with a qualified Dru yoga instructor. These consisted of Dru fascial warm-up techniques; intense hamstring and low back stretches; guided Dru relaxations and Dru breath training (techniques to improve lung capacity, stamina and to activate the relaxation response through the body). Sessions were undertaken for 60 min twice per week. The player soon reported subjective improvement in his hamstring freedom. 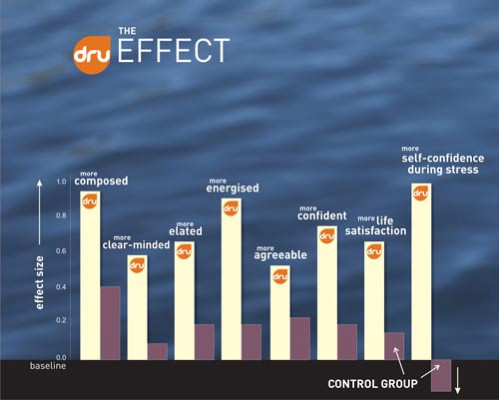 Results from 2012 research into the effects of Dru Yoga

New UK research, published in September 2012 in the Journal of Occupational Medicine, shows that Dru Yoga can reduce perceived stress and back pain at work.

Stress and back pain are two key factors leading to sickness absence at work, costing the British economy an estimated £17 billion per year.  This study by researchers at Bangor University suggests to employers that wellbeing programs that include yoga can have a significant impact not only in reducing stress, but also in preventing back pain.

More than 80 participants in the study were recruited from Conwy County Council and randomised into a yoga group who received one 50 minute Dru Yoga session each week for 8 weeks along with a 20 min DVD for home practice, while a control group who received no intervention.

Dru Yoga is one of the UK’s largest schools of yoga, and includes therapeutic stretches and postures to ease back pain, flowing movements designed to relieve stress, and breathing exercises which calm the mind.

When compared with the control group, the yoga group scores were significantly lower for perceived stress, back pain, sadness and hostility, and much higher for feeling self-assured, attentive and serene.

"The results indicate that a workplace yoga intervention can reduce perceived stress and back pain and improve psychological wellbeing."

Susan Williams, a Community Engagement Officer for Conwy County Council who participated in the yoga group, said:  “I found that the Dru Yoga programme had a positive influence on my level of confidence.  I felt more in control, ready, aware, dynamic, even recognizing my own power.  I was happier, and it was so much easier to manage my circumstances.”

The study authors concluded: "The results indicate that a workplace yoga intervention can reduce perceived stress and back pain and improve psychological wellbeing.

The study was published on-line in September 2012 in the Journal of Occupational Medicine (Oxford University Press). Read the study article >

In 2008, research into the benefits of Dru Yoga was conducted at the University of Bangor (UK). 48 employees were randomised into a yoga group and a wait-list control group.

The yoga group were given Dru Yoga for six weeks with three 60 minute classes per week.  The wait-list control group received no intervention during the six week study but were offered free classes after the trial.  Before and after measurements were obtained with the Profile of Mood States - Bipolar, and the Inventory of Positive Psychological Attitudes. 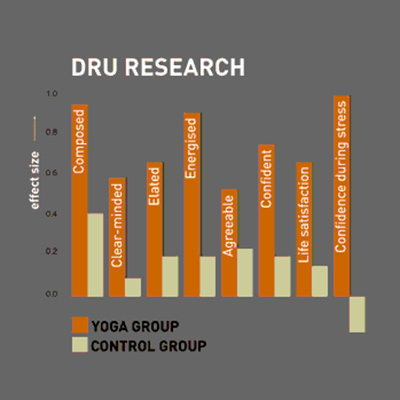 This study pioneers efforts to show that Dru Yoga benefits not just your physical health. Dru Yoga also benefits your emotional, mental and spiritual life - all of which are likely to improve your relationships, sense of purpose and connectedness to what's important in your life.

There is now a plethora of randomised controlled trial research showing the benefits of yoga to a whole gamut of health conditions including heart disease, pms, breast cancer side effects, back pain, depression, and cancer and there are many more.

The benefits of meditation 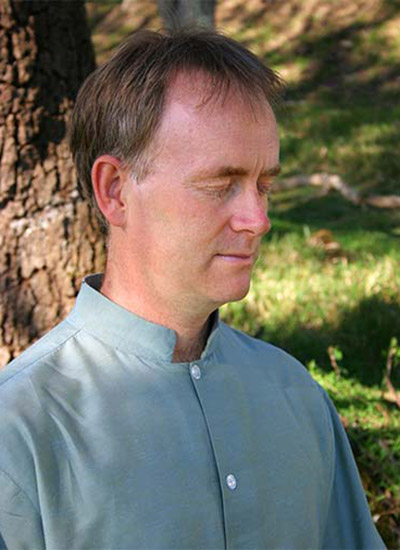 Science is now agreeing that meditation can be a powerful form of stress relief and can help general health.

More and more research is also being conducted on the benefits of meditation. Studies have shown that meditation helps a variety of conditions including: stress, depression, heart disease, cancer, back pain, asthma, anxiety, high blood pressure, sleep problems and allergies.

Here is small summary of the current research:

Want to experience the benefits?

You've read about the benefits, but why not make it your own experience? 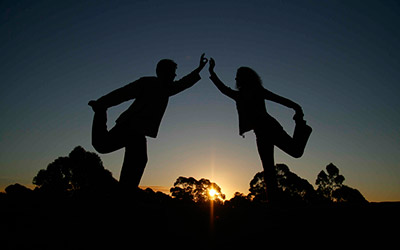 In 2005 we asked 440 Dru practitioners across the world what their experience was, and this is what they said:

Dru Yoga helps you create a better society! It helps people have more harmonious relationships and find greater peace within.

What kind of people are experiencing these massive transformations in their lives? About 65% are students of Dru Yoga or Dru Meditation classes; 35% are their teachers.

Amazingly, nearly 50% of these people say they practice their Dru less than once every five days. Imagine gaining all these benefits from something you do only once a week or so!

And then imagine how much you'd gain if you practiced some of these easy self-help approaches every few days.